This vignette introduces the concept of a performance analysis and demonstrates how eiCompare can be used to conduct one given voter files and districting maps.

What is a performance analysis?

A successful voting rights case may result in a local jurisdiction’s districting map to be thrown out, prompting the need for a new map. Thus, it’s necessary assess whether the new map provides sufficient representation for minority groups. It’s not desirable to simply wait for elections to happen and see what the results might be. Instead, we can look at past elections, and observe how candidates would perform if the proposed map was used at the time of the election. This is the basis of a performance analysis.

Ultimately, we need to assess the demographic breakdown across racial groups for each district in the new map. What data source do we use to calculate the percentage of each racial group? We could use total population or citizen voting age population (CVAP), as provided by the Census Bureau. However, these measures may not be accurate, because they assume that voter turnout is equal across racial groups. This is not always true, especially in cases of racial gerrymandering, where turnout for minority groups may be depressed. Instead, we argue that going to the level of the voter file is necessary, as the voter file actually informs who turned out to vote.

The steps in a performance analysis

To conduct a performance analysis, we need to join the voters in a voter file to the new districts and determine the turnout by race, per district. This includes the following steps:

eiCompare provides functions to perform steps 2-4 of the analysis, as well as a function that completes the entire pipeline. Note that Gecoding (step 1) must be performed separately. In the following section, we walk through each of the steps.

The example we’ll use to demonstrate the performance analysis is East Ramapo School District (ERSD), located in Rockland County of the New York City suburbs. ERSD is highly segregated, with the majority of Black and Hispanic students attending public schools and white students attending private schools. Furthermore, its voting system for the School Board was at-large, where all voters could vote for all seats on the school board. This system favored the white families whose students largely attended private schools, resulting in redistribution of funds that had adverse impacts on public school students.

In May 2020, the at-large voting system was struck down, and a ward system with a new set of districting maps was required. In a ward system, voters elect a representative for their own geographically compact ward. Two maps were proposed: one by the plaintiffs (New York Civil Liberties Union, NYCLU) and the defendants (ERSD). Ideally, the map should allow sufficient representation for the minority aggregate population (in this case, Black and Hispanic/Latino voters).

In this case study, we’ll focus on the defendant map. We’ll demonstrate how a performance analysis reveals that simply using CVAP to assess the minority constituency may overestimate the number of seats won by minority supported candidates.

Let’s take a look at a map proposed by the defendants, ERSD. The district map is composed of nine wards. To assess representation, we could examine the CVAP (the number of people who can vote) by race across the wards. Thus, let’s take a look at the fraction of CVAP voters that are in the minority aggregate, by ward: 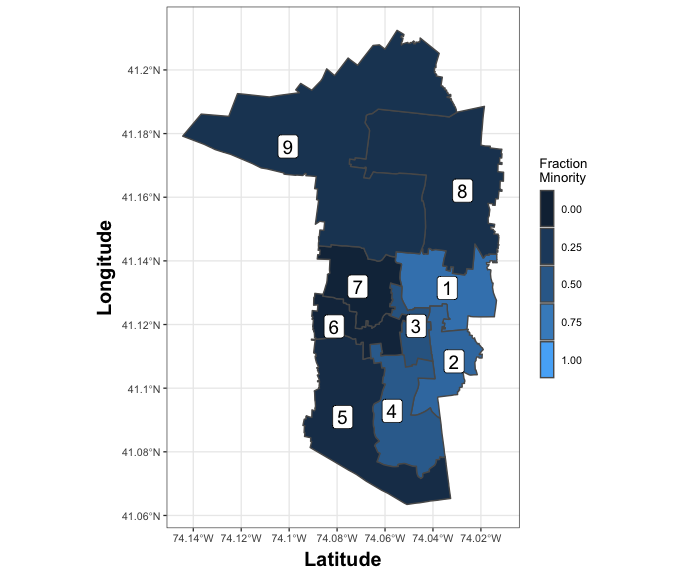 Examining this map reveals that, according to CVAP, four wards (1-4) have potential for minority voters to elect a representative of their choice (they have a plurality or majority). However, due to turnout differences across racial groups, this does not imply that the minority voters would have actually turned out sufficiently enough to elect four representatives. In other words, this map may not have “performed” well enough to guarantee representation, due to turnout.

Since the entire pipeline is contained within the function performance_analysis(), we’ll first use a toy voter file to demonstrate the individual steps. This toy voter file already is already “geocoded”, implying that step 1 is complete.

The voter file consists of 5 example voters whose surnames are actually found in the East Ramapo voter file, but locations are randomly assigned. The file depicts the bare necessities for conducting a performance analysis: a voter ID column to identify unique voters, a surname column for identifying race, and latitude/longitude columns for identifying location.

Observe that the above voter file contains a duplicate: voter “SMITH” appears twice, with the same voter ID (but different locations). This is a common occurrence in voter files, particularly when voters request a change of address. In these cases, the voter ID remains the same, but both the old and new addresses remain on the voter file for some time. Thus, voter files need to be de-duplicated.

To handle this, eiCompare has a dedupe_voter_file function which will automatically take the most recent entry in the voter file for repeated voter IDs. Voter files are typically sorted by registration date, so de-duplicating automatically takes the latest rows. Let’s apply this function to the toy voter file:

Now, there’s only one row for voter “SMITH” with voter ID “5”. Importantly, it’s the second row in the voter file corresponding to that voter, implying we have the most recent information.

Spatial join between the voter and shape files

Next, we need to identify which wards these voters are located in. Performing this spatial join is abstracted in the merge_voter_file_to_shape() function, which can convert the voter file to a geometry object and join on location. This function, in addition to requiring the voter and shape files, also requires a Coordinates Reference System to use (as a PROJ4 string) as well as the column names for the longitude, latitude, and voter ID (in order to de-duplicate the voter file after the spatial join).

We can double check that the correct wards were identified by plotting the voters on the ward map: 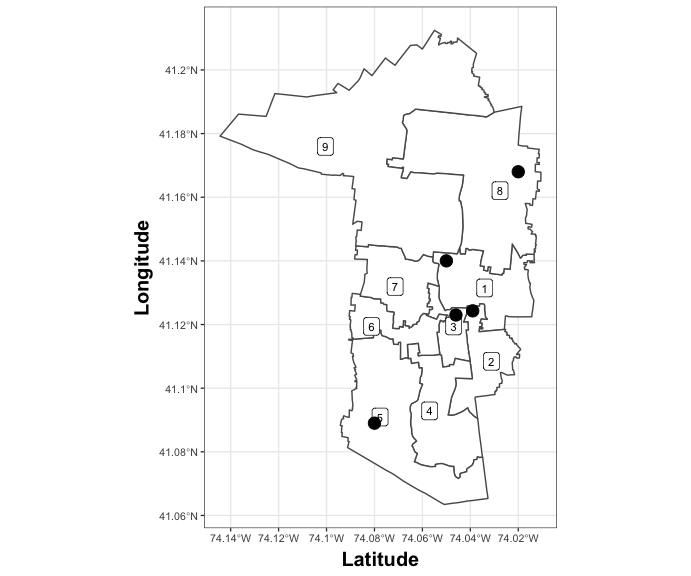 This function can also be used to join the voter file to a shapefile of Census blocks, to facilitate predicting race with BISG. Since the Census shape file is too large to include in the package, we’ll simply add the Census information by hand. However, the function would be used in exactly the same way, replacing ersd_maps with the name of the variable containing the Census shape.

Since New York state does not report race on the voter file, we need to estimate it using BISG (see the BISG vignette for more details on this approach). Briefly, BISG provides a probabilistic estimate of race by combining knowledge of a voter’s location and surname, both of which are informative of their race. eiCompare has a wrapper function for passing a voter file into the BISG function provided by the WRU package. To use this function, we’ll load some Census data that was extracted using WRU containing information about the racial demographics of Rockland County:

Let’s take a look at the race probabilities:

Lastly, we can get what we set out for: the racial makeup, per ward in the new map. This can be achieved with a simple group-by operation. In the toy voter file, the results won’t make any sense since there’s only five voters. So, let’s look at the final results on an entire voter file.

The entire performance analysis pipeline can be performed with the function performance_analysis(). This function handles all of the steps shown above, and outputs the racial turnout per district. Furthermore, it’s equipped with a variety of messaging to provide updates as the analysis is conducted.

To see this function in action, we’ll use it on the East Ramapo voter file. Ordinarily, this voter file would, at the very least, have the same components as the toy voter file (voter id, surname, location). For privacy reasons, we’ve taken the following actions:

Let’s take a look at the voter file:

We can see that the voters already have the FIPS codes and wards identified. Furthermore, some surnames are “NOCENSUSMATCH”, which indicate that these voters’ surnames weren’t found in the Census surname database.

The performance analysis function can handle a variety of scenarios, provided a voter file. For example, if a voter file needs to be spatially joined with the Census shapefile or ward shapefile, it can perform those joins. If not, it will use information already stored in the voter file. To clarify the particular scenario, we need to specify the correct parameters in the function signature. In the Ramapo 2018 case, we specify join_census_shape = FALSE and join_district_shape = FALSE, since the voter file already has this information. This implies that we don’t need to provide shapefiles.

Notice that the function outputted messages during the process, since we specified verbose = TRUE.

With the performance analysis complete, let’s compare the predicted turnout of the minority aggregate to the CVAP fraction: 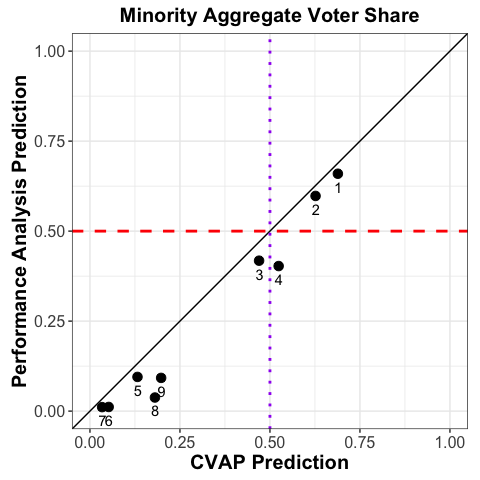 We observe that the turnout is below the CVAP predictions (identity line). Furthermore, using turnout reveals that Districts 3 and 4, despite having a large enough CVAP population for minority seats (or close to it: dotted purple line), would have much lower minority vote given turnout (dashed red line). Thus, the performance analysis demonstrates that using CVAP would exaggerate the number of seats awarded to minority candidates on the school board. In reality, only two seats would likely be awarded to minority-favored candidates, implying the need for a new map.