eiCompare is an R package built to help practitioners and academics quantify racially polarized voting (RPV) with ease and confidence. eiCompare was built with several types of users in mind:

eiCompare implements methods developed through decades of research on the measurement of RPV in US elections. It wraps around existing R packages such as ei, eiPack, and WRU, adding a layer of polish, usability and statistical robustness to their foundational tools. Broadly: the package provides users with the following:

eiCompare has tools that help at every step of the pipeline for quantifying racially polarized voting: 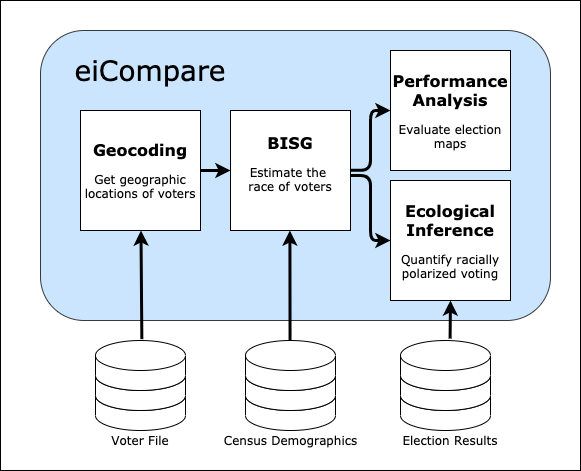 Users can measure RPV in any election, provided they have access to election results and the corresponding voter file (see below for information about the different types of data needed to measure racially polarized voting). The analysis proceeds via the following pipeline.

This process involves a lot of data cleaning, merging different datasets, and doing spatial joins to move between the different steps. eiCompare has functions to help with all of these little steps too!

The data needed to carry-out ecological inference for the eiCompare package include a voter file, surname lists, and census data (see figure below). In this section, we discuss what these sources of information are and how they are utilized along the eiCompare pipeline.

What’s in a voter file? The voter file is one of the main sources of information needed to perform ecological inference and detect racially polarized voting. The voter file is used (at the individual level) for predicting the race/ethnicity of each voter and geocoding voter addresses to perform Bayesian Improved Surname Analysis (BISG).

The voter file is public information and attainable via a state designated process that can be either requested by a physical and/or online form (see figure below). The process varies by state, can take up to several weeks to obtain, and may include a fee for processing.

The Census information is used in the eiCompare pipeline to obtain self-reported racial demographic information and linked to a specific location for an individual and household. This information is then used in BISG to help predict racial/ethnicity for voters. The census data files used come from a variety of sources such as shape files according to geographic units (i.e. state, county, block, tract, etc.), and census surname lists according to year. For instance, we are using a surname list from 2010. Thus, the census data is downloaded as a shapefile and then combined with voter file information to properly infer whether the voter is living in an area that is predominately of a certain racial group. It is also important to note that the identification of racial categories based on census data is limited to it representing a portion of the population at a given time period and may not represent the true counts of all racial groups in an area. However, census data gives a close account of the racial demographics of an area by count and proportion depending on the ecological unit (i.e. state, county, block, tract, etc.) you are interested in.

Along the pipeline of obtaining results using eiCompare, it is necessary to ensure that the voting file and census data have both been pre-processed and standardized to reduce consequential error in the accuracy of detecting racially polarized voting. In particular, data cleaning involves: properly formatting names and addresses to account for special characters or spacing, the detection of missing information, removing duplicate voter IDs, the simulation of missing information, and visualizations that help detect any discrepancies within the voter file information. We will use the following case of East Ramapo and data from the state of Georgia (which includes race/ethnicity in the voter file) to create R vignettes as a basis for demonstrating how we conduct pre-processing and standardization of the data needed to perform BISG and eiCompare.

Dr. Matt Baretto, Dr. Loren Collingwood, and their co-authors developed eiCompare as a ‘minimum viable product’ while conducting analyses for the East Ramapo court case (view the original package here). This summer we worked to revamp the package and demonstrate it’s capabilities through a different applications.

View the new package repository here. A short list of the new additions to the package:

Beyond upgrading the package, we also applied these tools in additional research work: